Join Us for Green Drinks

Join the Atlantic Coast Conservancy on the 4th Thursday of each month for Green Drinks - an international grass-roots effort to spread the word about environmental issues.

Thursday, September 26th, 2019
6:30 pm
Join us for an entertaining, informative gathering focused on the environment. This month join us for a great showcase of the local Chimney Swift population! These birds perform nightly here on Main Street and we'd love for you to see their aerial feats!

A Look at Our Latest Project 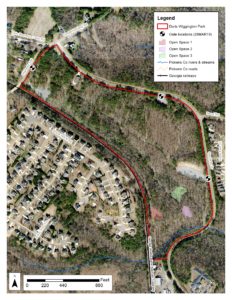 Doris Wigington Jasper City Park opened to the public on June 28, 2014. Since then the 60 acre property has been little used as a park. In fact, the 3.5 miles of trails with entrances on Gennette Drive and Lumber Company Road had become known as a hot spot for unsavory activity.

In 2018 Atlantic Coast Conservancy’s Robert Keller proposed adding features to the park to attract birds and birdwatchers, walkers and hikers, and the families, all while discouraging unwanted activities. One such project is the construction of Chimney Swift Towers.

Chimney Swifts are cigar shaped birds which spend summers in North Georgia. Their acrobatics may remind people of swallows, but Chimney Swifts are more closely related to Ruby-throated Hummingbirds. They have adapted to a life among humans, finding a home in chimneys after their preferred old-growth trees began disappearing.

The conservation status of the Chimney Swift was recently updated to Vulnerable on the International Union of Conservation of Nature (IUCN) Red List of Threatened Species. Stating that ““In recent times, the number of available chimneys has decreased as a result of the demolition of old buildings, the capping of old chimneys, and through chimney sweeps removing nests from chimneys (despite the species being protected by federal law). Even though a scarcity of chimneys may not be limiting the numbers of Chimney Swifts yet, the rate of habitat loss is increasing and possibly developing into a severe threat.”

The ACC is supporting  conservation by building Chimney Swift Towers in Doris Wigington Park. Chimney Swift Towers mimic actual chimneys, serving as roosting and nesting habitat for the birds. Much like a real chimney, the central tower and interior walls provide nesting and roosting opportunities for these birds. Specially adapted claws allow the Chimney Swifts to cling to the inside of the tower, where they build saucer-shaped nests made out of twigs glued together with the birds’ saliva. Chimney Swifts will not allow other birds (including other swifts) to use “their” tower while they are nesting, but in late summer, hundreds or event thousands of individual birds may roost in one large chimney creating a spectacular site overhead as they flock into the chimney near dusk.